on 16 February, 2016
I always like to make the analogy between audio and the culinary, not only for being things that one takes for granted but because it can be a tasty way to explain how our profession works. One of my favorite dishes is the “pasticho” and I will use it to explain some of the audio steps of a song.

When we go to cook, we choose the ingredients, say tomatoes, onion, meat, basil, oregano, cheese and pasta, they would be like instruments, drums, bass, guitar, piano, the miscellanies. If these instruments are not well recorded, they are distorted, for example, it’s like the tomatoes or the meat are rotten, putrid. If instead, we use some fresh ingredients, obviously it will taste better. We could compare the salt with the reverberation, there are dishes in which more salt is needed than in others, and it is not necessarily put at all. I do not put the tomatoes but I do to the meat and the pasta when I cook, the same goes for the reverb, I do not add to the bass, but I do on guitars.

When we cook the bolognese sauce, it’s like when we mix the drums, a little oregano would be the hi hat; the meat, the drum, and the tomato, the drummer. If we use a pot of the right size, we are working at 16 bit, if the pot is quite large, so that when we leave the sauce boiling two hours soft, do not splash out, it is like working at 24 bits. When preparing the white sauce, we are preparing the bass and the pasta could be the guitar. When we put all this together and put the pasticho in the container, we are already finishing the mix. We place our layers of pasta, bolognese, white cream and again pasta until we reach the top of the container where we will put a layer of parmesan cheese. Here comes the part where we place the pasticho in the oven, which for me can be mastering. If the one who is taking care of the oven removes the pastiche too late, it will be very toasted and with a touch of smoked, which can damage the subtlety of the tomatoes. This smoked could be compared to distortion, there are people who like it, there are people who only need a little bit of toast or that the gratin is only golden, not burned. There are dishes in which smoked is indispensable but the pasticho does not look very good, in my opinion.

There are several versions, with ham, raisins, eggplant or zucchini. The important thing is to do it with affection and dedication, and that no taste overshadows the others, as in the audio.

Dedicated to my first class of students at Audioplace Academy 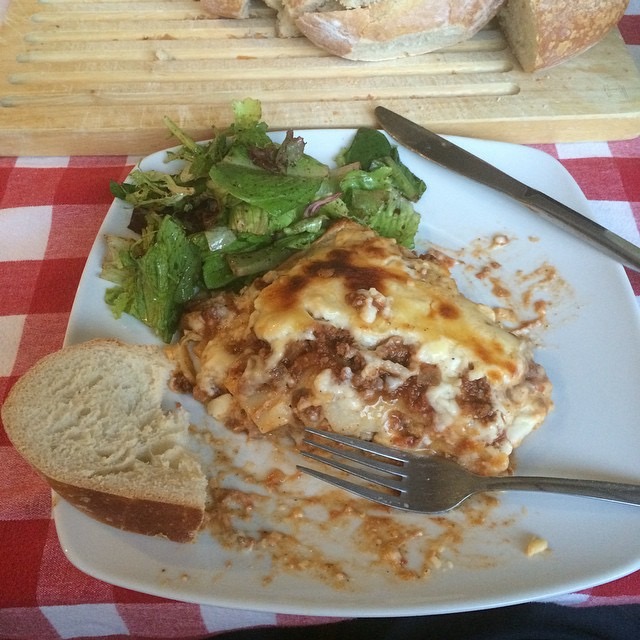