When the other day I received the manufactured copy of a disc that we just finished, I was surprised by the sound when I heard it on iTunes®, which is the program that has my default computer to play a compact disc. It sounded brighter, there was something in the highs that was not what I remembered. I took it and compared it with the original audio that the Wavelab program generates, because we had mastered it in my studio, and this audio was good, listening to it by the Mac Preview. Then I did the same with the audio of the album and I auditioned for the same player and it turns out that it was correct, the difference was generated by iTunes®. 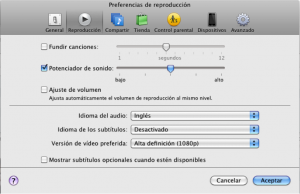 In the year 2001 after disarming Le Garage Studio with my partners José Gassó and Miguel González, I had to evolve towards a digital platform on a computer to work on my own and I had to choose which program to use. The engineer Jesus Jimenez had drums captured in a hard disk recorder Fostex and I took those audios and process them in the same way, in 4 programs that we had for the moment: Pro Tools (Digidesign), Digital Performer (Mark of the Unicorn), Logic (Emagic) and Cubase Vst 32 (Steinberg). First I made a mix with each one without any kind of process and the same levels; and later I repeated the mix panning and applying the same equalization to some channels to see how it responded with its native processes. We heard these mixes at the Optilaser Masterization room, the best place to make a blind comparison, and the differences were dramatic in some cases. I decided in favor for the sound of Steinberg, but coincidentally at that time I met Mexico’s representative of Digidesign and I told him about the experiment, and without letting me finish telling him the result, he himself told me that their strength was marketing and not the audio. Today, in 2014, these discrepancies are almost imperceptible.

I bring this example, because it repeats the case of how marketing remains the priority so shamelessly a company that has flooded the planet with devices / programs to listen to compressed, deteriorated and defenseless music; this same abuse is applied to any audio that passes through its algorithms. The improvements made to the program are aesthetic, practical, but not substantive. They are so aware of this that in the preferences of the program there is an option, which by default is turned on, to turn off or turn on an audio enhancer. When it is off, it looks as opaque as a tape with the head well dirty or with a low pass filter at 8 KHz. And the incredible thing is that when you listen to the simplest way on Mac, which is selecting the file and clicking the spacebar, it sounds almost perfect.

It is important to find the practical way to play audios where they are altered as little as possible, for example, using the same program used to mix and import a file.